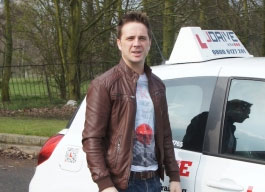 I have been working for U Drive MSM since March 2008; I decided to join U Drive as Glyn was an inspiration to me having a young fresh, dedicated approach compared to other schools I had approached in Lincoln. I also graduated from University of Lincoln with a Marketing Degree and quickly obtained the position as Assistant Store Manager at Toys R Us in Lincoln after graduating. After a while I felt I needed a new challenge with, more money, as we all do!! So I became an ADI instructor and joined U Drive. I find the job very rewarding, meeting lots of new people and making new friends. U Drive has the professional approach of putting the needs of the driving students first which is a refreshing attitude compared to other Driving Schools that just want to take the money.

I have recently taken up indoor climbing and will be looking at doing my first outdoor free climb later in the year.